The word Datta means "Given", Datta is called so because the divine trinity "gave" themselves in the form of a son to Atri and Anusuya. He is the son of great sage Atri hence, the name "Atreya" is added. 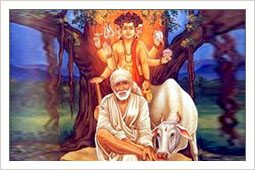 Anusuya became very famous for her devotion to her husband. To test her, Brahma, Vishnu and Shiva transformed themselves into mendicants, approached the hermitage of sage Atri, at the time when sage Atri was out of the hermitage. They begged for alms, Anusuya came out and offered food to them. They requested Anusuya that the food be prepared and served to them by her in the nude position. In the Indian tradition any guest cannot be turned away, as they are considered to be an aspect of God.

So, she bound by the rules of hospitality, agreed to accept their strange request. But such was the power of her chastity that when she brought the food, the three gods turned into infants whom Anasuya fed as a mother. After Brahma, Vishnu and Shiva showed their original form and blessed Anusuya that she will gave birth a son, who will be the embodiment of Brahma, Vishnu and Shiva. Thus Lord Dattatreya was born with two brothers and one sister they are Soma and Durvasa and Shubhatreyi. A great sage atri lived with his wife in an ashram near Sucheendram, near Kanyakumari, at the southern tip of India.

A temple honouring Dattatreya stands near the ashram. When they grew up, Chandrea went to Chandralok to live and shine, Durvasa went to the forests to meditate, while Dattatreya stayed back and looked after his parents. As Dattatreya was born of a boon granted by the Trinity, he is often depicted as one with three heads representing Brahma, Vishnu and Shiva. Dattatreya served his parents selflessly and was later born as an avatar purush (holy incarnation), considered to be the Sai Baba of Shirdi. In the general depictions, Dattatreya is portrayed with a cow and four dogs at his feet. The cow represents the mother earth and four dogs represent the four Vedas. Dattatreya is generally depicted with three heads, symolising Brahma, Vishnu and Shiva; past, present and future and creation, preservation and destruction.

Dattatreya left home at an early age to wander naked in search of the Absolute. He came down to spread the universality of true religion. His presence is not limited to any one country or sphere, as he is considered the Guru (teacher of all Gurus. Lord Dattatreya observed nature carefully, the elements, the sun and the moon, birds and animals, men and women and gained an insight into the nature of the world. Inspired, he went on to compose the Avadhuta Gita- the song of the recluse that explains the doctrine of detachment. Through various occult sciences like Tantra and mystical disciplines like Yoga, Dattatreya taught mankind the means to yoke oneself to the way of the cosmos. His students called him the fountainhead of all knowledge, the supreme teacher, Adinatha. He wandered around the world as a mendicant with his cow, Bhoodevi herself, and four dogs. Lord Dattatreya is popular deity famous among world as lot of are his devotees…

Shri Dattatreya or Datta Guru, an incarnation who came to light the lamp of wisdom among the people. Shri Dattatreya is a splendorous form. His face radiates all wisdom and draws us away from the lures of the world. Though He is the Supreme Lord of this universe, yet He is a total and supreme recluse. Though He moves from place to place, His favorite abode is the Holy Audambar tree (A type of fig type, Ficus glomerate). He has matted hair on His head. His body is ever smeared with holy ashes and He wears tiger-skin for His garment. A cow and four dogs are always with Him as His constant companions. He is an 'Avadhoot', ever anchored in Spirit, but always overflowing with compassion for all the beings and the entire creation. He is the embodiment of total Godhead. All the aspects of Godhead are fully manifest in Him. His faces and form are ever radiant with peace and divine charm.

Dattatreya is usually depicted with three heads, symbolizing Brahma, Vishnu, and Shiva; past, present and future; creation, preservation and destruction; and the three states of consciousness: waking, dreaming and dreamless sleep. He is portrayed sitting in meditation with his shakti beneath the 'wish tree' (Sanskrit: Kalpavriksha) with the 'wish cow' (Sanskrit: Kamadhenu) attendant. In front of him is a 'fire pit' (Sanskrit: Agnihotra) or 'pit' (Sanskrit: homa) the receiver of the oblation of 'sacrifice' (Sanskrit: yajna), and around him are four dogs.

• The Cow, which is always with Him, represents the Mother Earth and Dharma. She is the wish fulfilling cow 'Kamadhenu'.

• The trident indicates that He has transcended the three gunas, which constitute the illusory world: Sattva-illumination, Rajas-activity and Tamas-inertia.

• The 'Sudharshana chakra' , disc indicates that He is beyond the cycles of time i.e. the past, present and future and His holding of 'chakra' means He is the controller over the time.

• The conch represents the eternal sound 'AUM' – which is the manifestation of the Spirit. It is also the life principle in us and the cosmos.

• He always carries a begging bowl so as to teach us the lesson that we will have to share our wealth and food with others.

• The japa-mala, rosary He wears reminds us that our primary duty is chanting the sacred name of the Lord and meditating on the feet of the Lord, and our redemption depends on this discipline alone. Shri Dattatreya, in order to bless His devotees and the righteous ones, wanders about in the guise of a random guest at the lunch hour. That's why it is said that a random guest has to be treated as the very embodiment of Lord Dattatreya.

The twenty four gurus that Dattatreya found in Nature and Society became very famous and is part of several scriptures.

The Uddhava Gita a song embedded in the Bhagavata Purana, there is a story of Dattatreya sung by Krishna which enumerates a list of his twenty-four gurus: earth, air, sky or ether, water, fire sun, moon, python, pigeons, sea, moth, bee, bull elephant, bear, deer, fish, osprey, a child, a maiden, a courtesan, a blacksmith, serpent, spider, and wasp. The 24 Gurus of Dattatreya come from the 24 gurus of Avadhut described in the Bhagavata Purana.

Thousands of years ago, Guru Dattatreya gave Ashtanga Yoga (either fold path of Yoga) Lessons to the world, as follows:

There are very few temple exclusively for lord dattatreya one of them is in Sengalipuram near Kumbakonam in tamil nadu. The temple houses to most powerful yenthras namely kartha Veeryarjuna Yanthra and Sri Datta Yanthra. Datta Jayanthi (mahothsava) is a festival celebrated here on every Tamil month of Karthigai (November-December.). On data jayanthi devotees are advised to perform of six mala by chanting the mantra "OM SHRI GURU DATTA! OM SHRI JAYA GURU DATTA!"

In kaliyug people should chant the above said mantra with pure thoughts good habits, and constant remembrance of their holy name and mantra whenever you can afford please do some good deeds for poor and needy. If you don't get chance to serve the poor simply give gifts to the children, help people in day-to-day life, help people in office etc., this way your life will become meaningful.