Sadesati means (seven and a half – Hindi) a transit of Saturn on your moon sign in your natal horoscope. The seven and a half year period during which Saturn transits in the twelfth, first and second houses from the birth rashi (Moon sign) is called the Sadesati of Saturn (elarai nattu Sani). Saturn takes 30 years to complete the entire circle of 12 zodiac signs. Saturn transits through three signs in 7 1/2 years. Since ancient times, saadhe saati is a very important period in one's life, because it's very critical stage of life. The aspect of Sani Bhagavan (Shani dev) on a person's life it is not that saneshwar is destroyer alone. 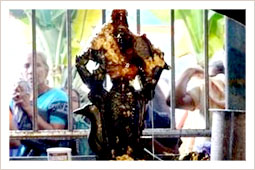 He is a revered to be both, a giver and destroyer. During this period like 7 ½ years saturn period (elarai nattu Sani, Saade Sati, Shani dosh) which may be three types. Mangu Sani, Pongu Sani and Marana Sani. He gives all tribulation to the concerned person. During Mangu Sani giving troubles to the person lot. In Pongu Sani, he bestows on them. And also Marana Sani effects health more than anything else.

• First in childhood (effect on education & parents),
• Second in youth (effect on profession, finance & family)
• Third in old-age (effects health more than anything else).

First stage of sadesati is give different types of problems like insult from others (a rude expression intended to offend or hurt); arising financial problems (poverty); it also affected health (physical, mental….) and troubles in family too suffers along with him. This period is very harmful.

Second stage of sadesati is middling period, they improved the life quality from mediocre to above average; even though you get success but you feel alone. During this period you may suffer separation of family. This period is mediocre.

3. Third in old-age (effects health more than anything else)

Third stage of sadesati is very cruel period, a terrific fact in human experience, during this period you may affected lot of physical problems like deeply affected by a strong feeling, affected by an impairment of normal physical or mental function, death of elders in the family etc., This period is highly rude.

1st Dhaiyya: In the first level, the transit of Saturn into 12th house from moon sign for 2 ½ years. It is called first dhaiyya. Very bad results are felt by the parents and close relations. If there any old people in family his health may be affected badly or the time when something ends. Saturn act of spending money for unwanted and unbearable expenditure.

2nd Dhaiyya: In the second level, the Saturn transit into the moon sign for 2 ½ years. It is called second dhaiyya. During this period, it affects several ways. Like family problems (between husband, wife, brothers, sisters, parents etc.,); putting someone in prison or in jail as lawful punishment; temporary loss of strength and energy resulting from hard physical or mental work; weak in health or body (especially from old age) etc.,

3rd Dhaiyya: In the third level, the Saturn transit into 2nd house from Moon sign for 2 ½ years. It is called third dhaiyya. It affects the health in persons and children. During this time the person may suffer physical and financial stress; mental or emotional strain; powerlessness revealed by an inability to act; if any benefit derived from others, that will be lost, a misleading falsehood etc.,

During shani period the people affected lot of physical and mental problems like lost opportunities; no money and few or no material possessions; frequently a symptom of infection; dissatisfied with someone or something; failure in attempts; death came as a terrible shock; Destroy by fire; An unfortunate mishap; especially one causing damage or injury etc.,

It is important although sadesati is unnecessary and unforeseen trouble resulting from an unfortunate event. But not everybody suffers from the bad effects of such transit of Saturn. Some people get very good results and bless some people with very good things. So it is not always bad in all cases. The biggest advantage of sadesati is that it teaches us important lesson in life which if learnt properly makes up the basic foundation of every success and achievement, it is an excellent planet. No other planet can give what saturn can, in fact having a well placed Saturn in ones chart is one of the best things to hope for! Sade sati gives perfect opportunity to be in touch with our spiritual self. In the long run, any person who value higher learning in life and accomplishments obtained after a series of trials will think that the existence of Sade Sati has made his life more meaningful. Shani dev gives always bad effects only to some people while it gives beneficial results to other people depending upon their horoscope.

"You will be able to know the following details after analyzing your birth horoscope chart like":
Periods of sadesati; Effects of sadesati (health, education, career, business, marriage, love, profession, relationship, life, etc.,), We can help you to clear your specific questions, doubts and also suggest the remedial measures.