By now the readers are aware of the Nadi Predictions. They are astonishing divinations of the ancient sages written on the palm leaf like Agasthya, Vashista, Bhrugu, Shukar, Kak Bhujandar and many whose names we read only in scriptures of Indian literature.

Jeeva Nadi is dynamic, vibrant and live Nadi predictions, wherein the Maharishi reacts to the needs or problems of a person, as if he himself is present before the seeker. He is reacting to the situation of the happenings on the spot. Thus, it is a very special and precise method. 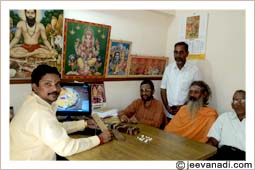 The present standard system of Nadi predictions is that, the seekers gives the thumb impression as per the gender (who tries to reach the leaf) and try to reach out to the exact leaf which matches to the description of the seeker. In this system there are chances that one may be lucky to pinpoint the pertinent palm leaf in matter of minutes or some times after hectic search of many hours, one has to go empty handed to try for the next time or to forget it as a bad joke "Jeeva or Dynamic Nadi" apparently looks similar in its appearance. But the contents and the method of reaching to the exact matter on leaf differs to a greater extent.

There is a Jeeva Nadi of Maharishi Atri or Atria and his consort Mahasati Anusuya. Many may not be aware about these personalities as per Puranic legends. Atri and Anusuya was the famous couple, for their penance and powers they had gained by severe Yoga Sadhana. They were tested by the three personalities who were supposed to be the creator Brahma, Vishnu the saviour and Shiva the destroyer. In disguise as hungry and tired pilgrims, the trio made a firm demand for mid day meals immediately; putting a strange and queer condition; that , Anusuya should serve them without cloths, without waiting for the host Atri, who was yet to return from morning rituals, (Anusuya should serve them without cloths).

Realising that this is a façade to test her, she complied the demand. Not only she turned the trio into infants but also breast fed them. Maharishi Atri was delighted to see the strange sight on return. His wife Anusuya, very fond of children was blessed with three extraordinary children. The trio asked Atri Maharishi to relieve them. However, the couple converted them in an Avatar called Dattatreyaa. Datta means given or presented, traya means trio, Atreya means to Atri family. In short, Avatar of the trio presented to Atri and his consort Anusuya for the betterment of the worldly affairs. The Dattatreya Avatar later on was treated to be the initiator of the Nava Nath - Sampradaya commune of nine Siddhas, Aadi Nath - Primal being Shiva. 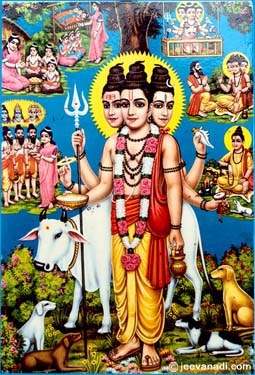 The present day person could seek the counsel of Maharishi Atri and Anusuya from three packets of palm leaves. The seeker starts getting ready and instant written answers narrated by the Nadi reader as if the couple is present opposite the seeker.