Astrology is a science dealing with its spiritual aspect, it also involves mathematics and Astronomy, vedic astrology (Jyotish) is part of Vedic knowledge, the collected verbal wisdom handed down to us by the great sages, the seers of the Vedas.

Jyotish in Sanskrit is derived from "Jyoti", which mean "light" and "Ish", which mean "God". Thus, Jyotish means 'Light of God'. It is a science, which studies the affairs of terrestrial living, which are influenced by the movements of the planets, in a philosophical and institutive way. It is also called the "Eye of the Veda Purusha" or "the wisdom of the heavens". 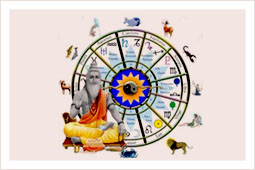 History of Vedic Astrology has its root in the Vedas of Hindu that are the oldest scriptures in the world library. Veda is derived from the root "Vid", which means, "to know". The Veda teaches how to achieve purity of heart, getting rid of impurities. The Vedas, believed to have been written down over a period of about ten to twenty thousand years ago. There are the "four" Samhita (collections) that we call the "Vedas".

• Rigveda: The earliest of these, is composed of about 1,000 hymns addressed to various deities, and mostly arranged to serve the needs of the priestly families who were the custodians of this sacred literature.

• Yajurveda : it contains prose formulas applicable to various cultic rites, along with verses intended for a similar purpose.

• Samaveda: is made up of a selection of verses (drawn almost wholly from the Rigveda) that are provided with musical notation and are intended as an aid to the performance of sacred songs.

• Atharvanaveda: It deals chiefly with the practical side of life, with man, his protection and security.

The Vedas has "six" supplements also known as Vedangas or the limbs of the vedas.

The effects of a person's actions that determine their fate in this life and the next incarnation.


Your karma or fortune is determined by a predestined cosmic design. You are a soul incarnating in a body at a very specific time and place, and your life is a reflection of the grater whole into which you are born just as flowers bloom at certain times, say during spring time, when all conditions are perfectly suitable. So is the case with our births on this planets.

Astrology is merely the medium of indicating the karmas (destinies) which has a link with the past life and also with the future. The karmas are woven in the horoscope so as to indicate the balance of karmas that the native is carrying as well as his task in this life.

Our powerful life karma is charted by the natal horoscope. A good Astrologer can see which areas of life may be strong, joyful and flowing, and which may be weak, problematic or blocked. A highly developed Astrologer may offer possible remedies for negative karmas.

Vedic astrology shows on the casting of an astrological chart or horoscope, it is a chart of the heavens at the time and place of birth which shows the positions of the planets and their relation to the new born child. Horoscope forecasting the understanding of life, the journey of the spirit from past to present life, effects of karma on present life, doshas & remedies and suitable gem stones as per your characteristics & the analysis of general events in life such as education, career, source of earning, family life and health etc.
CALL US NOW
+91-94439-86041
Copyright 2010@jeevanadi.com | All rights reserved
SITE DEVELOPED BY HTSuite Web Solutions